How Do Hydraulic Cranes Work? 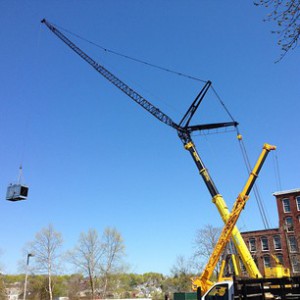 systems. It’s come a long way since then, developed for use in all manners of industries, from construction to automobile manufacture.

Modern hydraulic cranes were designed to lift immensely heavy objects to assist with moving materials, heaving wrecks aside, or even wrecking structures. As one of the most valuable tools for any industrial company, the hydraulic crane works on some very basic principles.

Just like a strongman at a circus sideshow makes lifting a huge barbell seem like an easy task, so does a hydraulic crane make short work of virtually any bulky object. It’s simple to forget just how intense the focused strength of a hydraulic crane can actually be, since they pick up everything from whales to steel bridge beams without strain.

The very basis of hydraulics is the transmission of force between points through a fluid. The fluid being used is incompressible, which means its already at its maximum density. Typically, the fluid in question is oil.

When a piston applies force in one direction (down), it pushes the oil against another piston, driving it up with all of the original force. A pump creates the necessary pressure. Most hydraulic cranes have a two-gear pump that pressurizes the oil.

Of course, there are other simple components that make a hydraulic crane functional. The boom, which extends an arm in the desired direction to lift the load, and the hook, which essentially picks up the load. Without these basic and simple additions, even the most powerful hydraulic crane would be useless!

If you need helping renting hydraulic cranes in the New England area, learn how Astro Crane can help.