Tower Cranes Are Used to Perform Many Tasks 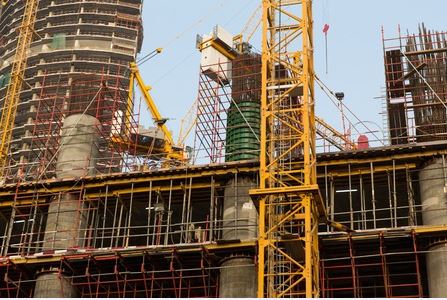 If you’ve ever been on a major construction site, there’s a good chance you have seen a tower crane on it. Tower cranes are used to pick up and move very heavy pieces of equipment and building materials. They often extend several hundred feet into the air, and they are capable of lifting things that other cranes wouldn’t be able to budge.

Tower cranes contain several different parts that work together to conduct lifts. The base of a tower crane is bolted to a concrete pad on the ground that is used to support the crane. The mast of a tower crane is connected to the base and provides the crane with its height. The slewing unit is located at the very top of the mast and contains a gear and motor that allow for the tower crane to rotate. Moreover, the jib, machinery arm, and operator’s cab are located over the slewing unit. They are the parts that are used to pick up things and move them around when a crane operator is in position.

Each tower crane is a little bit different, but on average, tower cranes are capable of reaching heights of about 260 feet and extending outwards about 230 feet. They can pick up as much as 18 metric tons, but they cannot do it when the majority of the weight is located at the end of the jib. The crane operator is in charge of determining how much weight a tower crane can hold based on the weight’s position along the jib. The closer the weight is to the operator, the more weight the crane is capable of picking up at one time. The operator relies on limit switches called maximum load switches and load moment switches to ensure the crane isn’t ever overloaded with weight.

Tower cranes can really come in handy on a construction site, but it’s important for you and your company to utilize them properly in order to avoid running into any issues. Astro Crane can help you obtain a tower crane and speak with you more about using it the right way. Call us at 978-429-8666 to schedule a crane rental.