There are a lot of different types of cranes, including two main categories– static and mobile ones. Static cranes work in place and typically aren’t moved around a job site, while mobile cranes can be more easily moved. Mobile cranes usually have a telescopic boom and are cable-controlled, which makes for a quick setup. Of the two categories, mobile cranes are generally more practical and cheaper than static cranes.

There are several types of static cranes. One you might notice the most is the tower crane, which is typically seen at construction sites of tall skyscrapers. They carry huge and heavy loads high up in the air. Fixed to the ground and attached to the side of the structure, tower cranes are well-known for lifting very heavy loads.

Have you heard of a hammerhead crane? It looks like an upside down “L.” As a type of tower crane, this sort of crane is known for its jib that rotates 360 degrees horizontally at a fixed level around a mast. This type of motion is known in the business as “racking.”

Gantry cranes have legs to support a bridge, trolley and hoist– and they travel on rails or tires. They’re typically used to construct bridges or in places with limited overhead space.

Besides the aforementioned cranes, there are other static types including luffing, deck, bulk-handling and loader, among others.

There are several types of mobile cranes. Perhaps the best known are truck-mounted cranes whereas the same engine is used for both the crane and the undercarriage. With a rotating cantilever boom (that can turn up to 180 degrees or 360 degrees), truck-mounted cranes are popular because they can be driven to/from sites easily. Once on site, they can easily move around the site, too. 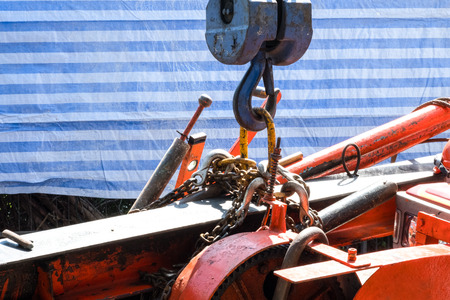 Another type of mobile crane is the rough-terrain one, which is able to maneuver over rough terrain that’s uneven, rocky, etc. These types of cranes use rubber tires, are self-propelled and have wide wheebases. With large engines, they’re quite stable and used in places that are “hard to get to.”

How about all-terrain cranes? They can handle rough terrain while still being street legal. With up to nine axles, these types of cranes use outriggers for support, making them stable to handle heavy loads. All-terrain cranes are used to construct things like wind turbines and to install things like pipelines.

Have you heard of a crawler crane? This type of mobile crane is attached to a vehicle with large tracks. Heavy and slow-moving, they’re not too easy to transport from site to site, but they can travel over any surface.

Other types of mobile cranes include floating ones (in water), sidelifters (a semi-trailer mounted with a pair of cranes) and telescopic (often used in rescue missions thanks to their compact and collapsable booms).

In New England, when you need to rent a crane, you can call Astro Crane. With hydraulic cranes ranging from 6 to 600 tons, Astro Crane provides service all over New England with an extensive and well-maintained fleet. Check out the fleet, here.