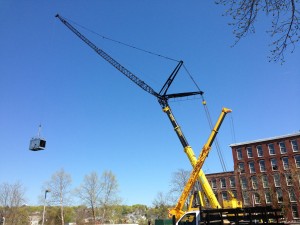 If you lived in Buffalo, New York, during the past few decades then you would have been surprised when the formerly depressed city suddenly saw five cranes dot its skyline in the past two years as new buildings went up. For many young people it was the first time they’d ever seen cranes in downtown Buffalo, and it gave them a sense of awe and hope for the future of Buffalo. Cranes indicate “something’s happening.”

Interestingly, cranes are not only functional to help build tall buildings in cities, but also seen as adding an artistic quality to skylines.

Visual artist Brandon Vickerd has come up with an idea in Washington, D.C., this summer involving cranes as art. His “Dance of the Cranes” involves the choreography of cranes and their movements in a dedicated place in the city for people to enjoy watching as they make their intricate moves. Clever, right? Vickerd wants people to pay attention to the beauty of cranes’ sweeping movements taking place over their heads. He likes the the role cranes play in a city, adding to its urban vibrancy, as well as the skill it takes to operate them– a coming together of man and machine to do great things.

As for Vickerd’s “Dance of the Cranes,” people will see two cranes more than 200 feet above street level lit up with lights, moving to music. He hopes to get people thinking and talking about cranes in a way that involves noticing their elegant beauty. Cranes as art? Yes!